If you are looking for an air purifier to remove all kinds of air pollutants with long-lasting filters, then the IQAir HealthPro Plus might be a good fit. IQAir HealthPro Plus is effective against ultrafine particles, which float in the air for a long time. The medical-grade HyperHEPA filter can remove 99.5% of microparticles of 0.003 to 1.0 microns range.

Want to know more about the IQAir HealthPro Plus Air Purifier?

In our IQAir HealthPro Plus review, we explore its features, pros, and cons. We also include a comparison among three HealthPro models and answer some common queries about this air purifier. 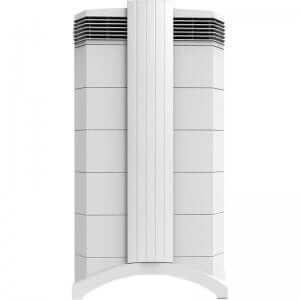 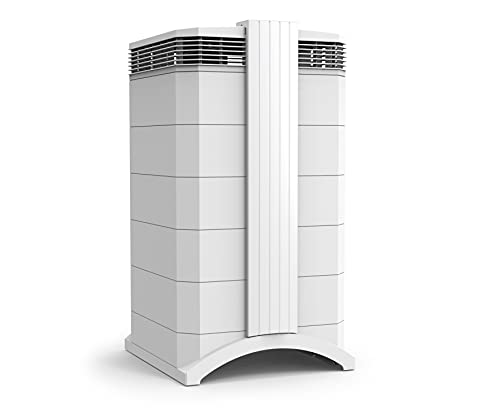 951 Reviews
IQAir HealthPro Plus Air Purifier - Medical Grade H13 HyperHEPA filter for...
Get it from Amazon

According to EPA, the most effective way to address indoor air pollution after source control and ventilation is by using an air purifier. The IQAir HealthPro Plus air purifier is just what you need. It features a HyperHEPA filter capable of removing particles 100 times smaller than a typical HEPA filter does. It also features an odor filter and pre-filter that eliminate odors, VOCs, pet dander, and pollen.

Here is an in-depth look at IQAir HealthPro Plus air purifier features.

The air purifier comes with a 3-stage filtration system. It’s composed of a pre-filter, a V5-Cell gas and odor filter, and a HyperHEPA filter. The filter housing is completely airtight to prevent any air leakage.

The PreMax pre-filter works by eliminating coarse particles. They include mold spores, pet dander, pollen, and others. By removing these particles from the air, also protects the main particle filter from becoming clogged early.

Tested in IQAir production facility in Switzerland, the HyperHEPA filter can remove particles such as tobacco smoke, ultrafine dust, airborne microorganisms, which are less than 0.1 microns in size. These ultra-fine particles form 90% of airborne pollutants, which linger in the air for hours before settling down.

What you need to know is that the PreMax pre-filter lasts for 18 months, while the V5-Cell gas and odor filter last up to 2 years. The HyperHEPA filter lasts up to 4 years and 2 months. The lifespan of the filters is based on daily 10 hrs of usage at fan speed 3.

The IQAir HealthPro Plus is available in a vertical, modular design. These are the product dimensions – 28 inches high by 15 inches wide and 16 inches deep. As such, it’s perfect for large spaces such as the living room, bedroom, kitchen, and even your home office.

The intake is at the base of the air purifier. It sucks up indoor air with the help of a powerful fan. The air passes through the 3-stage filtration system, where it gets cleaned before re-distribution in the house.

After removing all ultra-fine particles, the fan redistributes clean air via the top outlet. What you need to know is that the outlet features the EvenFlow diffuser technology.

As such, you get to experience 320-degree air delivery, day and night. You also get to experience no annoying draft and noisy air. This means you can sleep peacefully at night and have a conversation with your family or friends while the air purifier is running.

Another great feature incorporated into the vertical air purifier is the 3D ultra-seal technology. This patented technology helps to make the purifier airtight. It seals the filter frame to the housing, eliminating air leakage.

As said earlier, the IQAir HealthPro Plus features a new edition fan. This is a powerful fan suspended in a housing unit. In fact, IQAir incorporated eight shock absorbers in the housing to isolate the fan.

Although the fan is very powerful, it uses less power – 27 watts at the lowest speed. This means you get to save as the cost of running the fan is only a few pennies.

The purifier’s fan has another advantage – large coverage. With the best filtration system and a CFM of 300, It can clean a 450 square feet room with 5 air changes an hour.

This makes it perfect for large and small spaces. Did you know the US Olympic used the IQAir HealthPro Plus in the athlete training and housing facilities? Well, now, you do.

Monthly Energy Consumption: ~ $4 (based on 12 cents per kWh and 12 hours use on level 3 fan speed per day). Use our Energy Usage Calculator to find out the bill based on your usage and the local energy rate.

IQAir HealthPro (HP) series has 3 models: HealthPro Compact, HealthPro, and HealthPro Plus. Here are the differences between them: 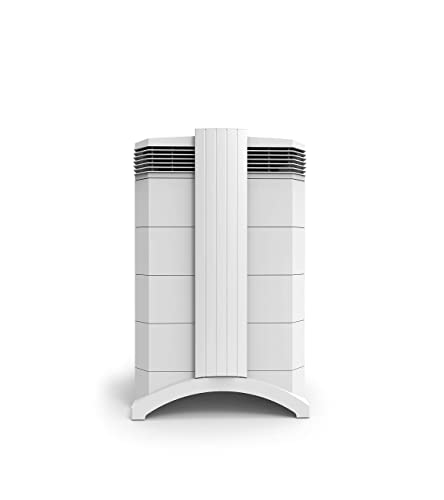 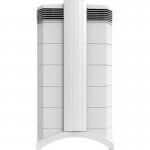 Q. How often should the filters be replaced?
A. IQAir recommends that you replace the PreMax filter after 18 months. For the V5-Cell Odor filter, replace it after 24 months, and the HyperHEPA filter after 48 months. The air purifier has filter life monitors that calculate and keeps track of the filter’s life.

Q. Are the replaceable filters expensive?
A. Yes, the filters are a bit expensive. But the good news is, replacement is usually incurred gradually. For example, the HyperHEPA filter is only replaced once every four years, while the carbon filter gets replaced after two years.

Q. Can you vacuum or wash the filters?
A. No, you cannot wash or vacuum the filters. IQAir recommends that you replace the filters with original ones.

The IQAir HealthPro Plus is a must-have air purifier for homes with allergy and asthma sufferers. Thanks to its 3-stage filtration system, the air purifier has a cleaning efficiency of 99.5% at 0.003-1.0 microns range.

Despite being expensive, we highly recommend this air purifier if you investment on long term to create the healthiest home.

The most unbiased and honest reviews about air purifiers you found on the internet. 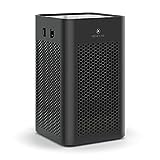 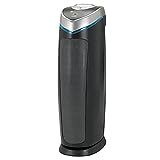