A perfect air purifier is one that filters both particulates and gaseous pollutants from the air without releasing ozone or other harmful byproducts. Levoit air purifiers are the safest on the market. Because they only use mechanical filters in their air purifiers and don’t use any electronic filtrations.

Levoit LV-H133 is a 23.6-inch tall cylindrical-shaped air purifier that has a complimentary 3-in-1 filter with a built-in dust sensor suitable for a 400 sq ft room.

In this Levoit LV-H133 review, we discuss its features, operating costs, pros, and cons. We also include a comparison between the Levoit Tower LV-H133 and LV-H134 air purifier. 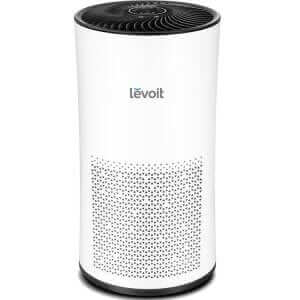 Levoit is a trusted American brand with a focus on making smart air quality improvement devices. For years, they have built air purifiers with high efficient multi-stage filtration systems.

Levoit LV-H133 is from Levoit’s Tower series air purifier lineup. Let’s see what it can do.

The purifier has a three-stage filtration system. They include a pre-filter, a True HEPA filter, and an activated carbon filter in a 3-in-1 cartridge. The preliminary net filter captures large particles such as hair, lint, pet fur, dust, and pet dander.

After the pre-filter, you have the H13-grade true HEPA filter. With a 99.97% efficiency rating, this filter traps and removes particles as small as 0.3 microns from the air. They include pollen, fine dust, smoke residue, and many others.

All three filters come as a single unit. This makes replacement an easy task. The filter has a lifespan of 6 to 8 months. To track the lifespan of your filter, check the filter replacement indicator.

It illuminates when it’s time to buy and replace the old filter. To replace your filter, follow these simple steps:

The air purifier has touch-based controls. Every mode and button is intuitive. Not only that. The beautiful interface makes it appealing. To change a setting or run a function, press the button once.

Let’s start with the filter indicator. This button illuminates when it’s time to replace the filter. This should happen after 6-8 months since you last installed a new filter. If you replace the filter, press the button for three seconds to reset it.

After the filter indicator, you have the timer button. It allows you to set the timer up to 12 hours in any mode. If you don’t want the purifier to operate all the time, set the timer. 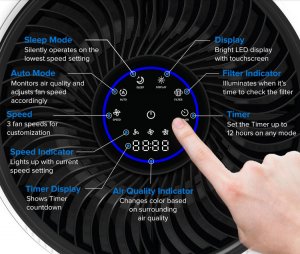 Sleep mode is another useful function. It is recommended that you run an air purifier 24 hours a day, even while sleeping. To ensure noise from the fan does not interrupt your sleep, select sleep mode. The purifier will run at the lowest fan speed allowing you to sleep soundly.

High Performance in a Sleek Design

Due to the powerful filtration system and fan, the purifier has a CADR of 274 cfm. As such, it’s perfect for medium and large-sized rooms. It can clean air in rooms as large as 410 square feet. In such places, it can clean the air in 12 minutes (5 air changes per hour).

In large rooms measuring 1,030 square feet, it can clean in 30 minutes. While doing so, it consumes 47 watts. This is less compared to most traditional light bulbs. As such, the purifier is energy efficient. You can run it all day and night without worrying about power consumption.

The air purifier has a tower design measuring 23.6 by 12.5 inches. As a floor model, you can place it anywhere in your living room, kitchen, or bedroom. Just make sure it’s 15 inches (38 cm) away from any object. If the air intake is close to any object, the airflow gets disrupted.

The unit weighs 21 pounds, which is slightly heavy. Sadly, it does not come with a built-in carry handle. The good news is, it’s white and comes in a sleek design. As such, it matches your home decor perfectly. This is true, especially if you prefer the Scandinavian look.

While it’s a floor model, it lacks wheels or legs. Instead, it has a plastic base that offers stability to the purifier.

In sleep mode, it generates 25 dB. This is comparable to a whisper. If you set the purifier to the highest fan speed, it makes 56 dB(A). This slightly below the noise generated by background music and a normal conversation.

Annual Filter Replacement: ~ $99 based on 6-months usage per filter (check availability & filter price).
Monthly Energy Consumption: ~ $2 (based on 12 cents per kWh and 12 hours use on the top speed per day). Use our Energy Usage Calculator to find out the bill based on your usage and the local energy rate.

Check out our top picks >>> The 5 Best Levoit Air Purifier

The Levoit LV-H133 and Levoit LV-H134 have almost similar form factors, and both are Tower series. Built by the same company, they feature a 3-in-1 filter, including H13 HEPA.

The following are some of the differences between the two devices.

Both the Levoit LV-H133 and the Levoit LV-H134 have a built-in dust sensor to determine real-time indoor pollution. However, the sensor of the LV-H133 is infrared-based while the LV-H134 one is laser-based, which is more accurate.

While both the air purifiers have almost the same form factor, only LV-H134 has a 360-degree air intake grill.

Q. Can I vacuum the outer surface of the housing to remove dust and pet hair?
A. You can vacuum the unit and use a dry, microfiber cloth to wipe the housing. This will get rid of the dust, pet dander, and lint.

Q. Does it emit ozone?
A. No, the Levoit LV-H133 doesn’t emit any ozone as it has no electronic filtration, such as ionizer, plasma, or ESP.

Q. Does this unit make the same noise as the Levoit-H132 air purifier?
A. This model uses a brushless DC motor that is quieter, especially at low fan speed (25 dB). On the top fan speed, the sound is like white noise, which can be beneficial to many, even during sleep.

The Levoit LV-H133 might be a good air purifier for pet owners and allergy sufferers. It comes with a three-stage filtration system that includes an H13 HEPA filter and an activated carbon filter. Both filters work effectively to remove airborne particles and various household odors. The elegant-looking design will blend with any modern decor easily.