Everyone has a responsibility to make healthy air a goal. To do so, the first step is to control the source of the pollutant. At home, sources of pollutants can include furniture polish, carpets, rugs, and even cooking. At work, carpets, building materials, ventilation, and cleaning products are sources of pollutants. Others include fragrances, scents, and automobile exhaust.

As a person, your health is at risk. Poor indoor air quality can make your asthma and allergies worse. It can also irritate your throat, nose, and eyes. To control or eliminate pollutants in the air, you need an air purifier with a medical-grade HEPA filter. A good example is the Levoit Vital 100 Air Purifier. White in color, it comes with a powerful filtration system. As such, it’s ideal for pet owners and people with allergies.

Here is the in-depth review of the Levoit Vital 100 Air Purifier. 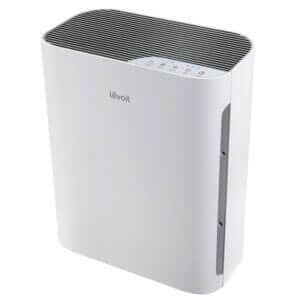 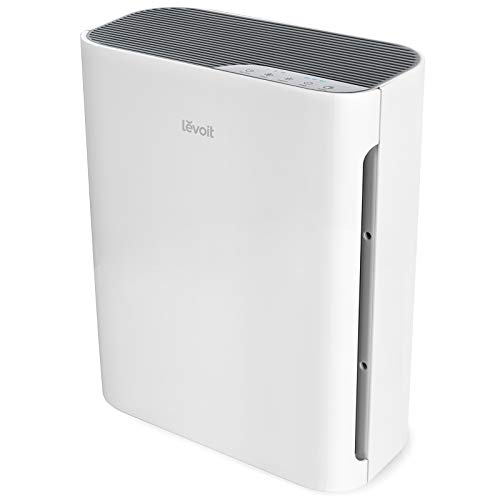 The Levoit brand came into the scene back in 2017. Although the company is a few years old, it’s renowned for building smart home solutions that include air purifiers. Combining powerful filtration systems with intelligent controls, the purifiers can clean the air several times in an hour. This reduces exposure to the contaminants.

Here are the features of the Levoit Vital 100 Air Purifier.

The Levoit Vital 100 Air Purifier has a powerful filtration system consisting of three filters. They include a fine preliminary filter, an H13 HEPA filter, and a honeycomb activated carbon filter.

The pre-filter is the first stage of the filtration system. Made of fine fiber, it traps large particles such as lint, dust, hair, and pet fur. What you need to know is that the pre-filter is washable.

To improve its performance, you can toss it in the washing machine after a month.

The Levoit Vital 100 Air Purifier has the following dimensions: 12.8 by 6.4 by 16.1 inches. It weighs 9.3 pounds. Despite tipping the scales on the heavy side, it’s portable. You can carry it from room to room and place it anywhere on the floor. It comes with a built-in carry handle, which makes your work easier. Just make sure the purifier is not close to a heat source such as the radiator.

The purifier has a tower design with the air intake on the side and the top outlet. You’ll notice that the air intake is unlike other models with a grille. This model has intake vents designed specifically for lint, pet fur, and hair. As such, the large slots prevent the build-up of lint, pet hair, and other debris.

The purifier’s body is made of ABS plastic. This material is strong and can withstand impact. It’s also heat resistance, but as we said earlier, avoid placing the unit close to a heat source. While the body may not melt, the damage will occur to the internal electrical components.

It features touch controls. You have the power button that starts and stops the purifier. You also have buttons to control fan speed and LED lights. Other buttons include the filter indicators and timer.

The fan has three speeds. At speed 1, the purifier has an ACH of 4.5 over 139 square feet. As such, it’s ideal for cleaning the air in your bedroom. This ensures that you have a better sleep.

The purifier has a maximum CADR rating of 130 CFM. What this means is that it can cover 500 square feet in 30 minutes. If placed in a 300 square foot room, it will clean the air in 18 minutes.

The rated power of the Levoit Vital 100 Air Purifier is 55W, while the standby power is 0.5W. As such, you can run the purifier day and night without worry about rising energy bills.

The Levoit Vital 100 Air Purifier is ultra-quiet during operation, especially at the lowest speed. This unit produces 23dB of sound at the lowest fan speed. This noise level is slightly above a whisper heard a meter away or light wind in the trees at 20dB. It’s also lower than a low voice conversation at 30 dB.

This means every night, you can experience restful sleep while breathing in fresh, clean air. At the highest fan speed, the purifier generates 50 dB. This is similar to the sound made by a washing machine or moderate rain. The good news is, it does not produce harmful noises that would impact your health negatively.

The unit is safe and certified. In fact, its FCC Certified, CARB Certified, and ETL Listed. You can use the unit with peace of mind because it’s 100% ozone free.

If you have higher ceilings, use our Air Changes per Hour Calculator to calculate the suitable room size.

Annual Filter Replacement: ~ $36 based on 6-months of usage per filter (check availability & filter price).
Monthly Energy Consumption: ~ $2.4 (based on 12 cents per kWh and 24 hours use on the top speed per day). Use our Energy Usage Calculator to find out the bill based on your usage and the local energy rate.

Check out our top picks >>> The 5 Best Levoit Air Purifier

Levoit is a great brand, and these purifiers are a testament to that. First off, they have a sleek, modern design that fits perfectly with your home decor. Second, they come with medical grade H13 HEPA filters.

When it comes to noise level, both are ultra-quiet at the lowest fan setting. By reducing noise, you can sleep better. While both purifiers have several similarities, they have differences too.

When it comes to design, both are sleek and stylish, but they differ in shape. The Levoit Vital 100 is tall and narrow. Its air intake is on the side while the outlet is at the top of the unit. This allows for more distribution of fresh, clean air in the room.

The Levoit Core 300 has a cylindrical body that is 14.2 inches tall. As such, it’s slightly smaller compared to the Levoit Vital 100. It has a 360-degree air intake while the outlet is at the top. Thanks to the bottom to top airflow system, the unit creates a strong airflow.

The Levoit Core 300 produces 24dB at the lowest fan setting and 50 dB at the highest fan setting. There is a difference between the noise level, but to experience a sound sleep, turn the LED display lights off from both purifiers.

This ensures zero light pollution as you sleep.

Q. Can I place the unit on a higher dresser?
A. Although this unit is a floor model, you can place it on a dresser. The flat design saves space and won’t be an eyesore.

Q. What is the lifespan of the filters?
A. The pre-filter is washable so that you can toss it in your laundry machine for cleaning. For the HEPA and activated carbon filters, they both have a lifespan of 6 – 8 months. Check the filter indicator light to know when to replace the filters.

Pet odors, cooking odors, and smoke are not only unpleasant, but they are harmful to your health. By using the Levoit Vital 100, you can control odor and allergens in your home and office. As such, you can ensure the indoor air is fresh and clean.

We recommend this unit to pet owners and people who have asthma due to the powerful filtration system. Composed of three filters, it traps and removes VOCs, odors, dust, airborne bacteria, viruses, and other pollutants.

If you run the unit for 24 hours in your home, you probably will not experience unwanted symptoms such as sneezing and congestion.

The most unbiased and honest reviews about air purifiers you found on the internet.