Levoit Core P350 Air purifier is designed for people who have pet allergies. The dead skin cells, aka dander from your cat or dog, are allergy triggers, and they float in the air for a long time.

The air purifier incorporates a 3-in-1 filter combination which not only traps pet dander and hair it also helps to reduce pet odors. The specially designed pre-filter and carbon filter do the job with a 360-degree air intake system. 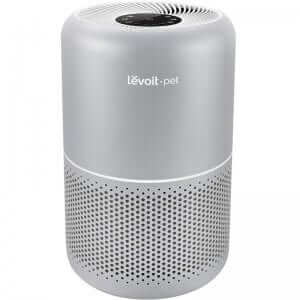 Check out other Levoit air purifiers:

Both the Levoit Core P350 and the Levoit Vital 100 are made to catch more pet hair and dander; the Core P350 has some advantages. It’s more efficient with a 360-degree air intake design, higher airflow rate, and a pet lock feature.

The Levoit Core P350 Air Purifier has a cylindrically shaped body. What you like about the air purifier’s shape is the sleek design. You also like the 360-degree air intake. It allows air in through the filtration system, where a variety of contaminants get captured.

The cylindrical-shaped air purifier can easily blend with modern home decor. You can place the air purifier by your bedside and sleep all night, confident that you are breathing in clean air.

Check out our review >>> The 10 Best Desktop Air Purifiers.

Besides the design of this air purifier, we also liked its filtration system. It has a 3-stage filtration system composed of a pre-filter, a HEPA, and an activated carbon filter. The non-woven pre-filter captures particles such as pet dander, hair, fur, and dust which are more than 1 micron in size.

The next stage is the H13 grade True HEPA filter to remove 99.97% of ultrafine particles of 0.3 microns and larger. The granular activated carbon filter neutralizes odors from pets.

What’s unique about this filter is that they feature the ARC or Air Reborn Carbon formula. It works by breaking down air pollutants into harmless molecules.

These molecules get locked within the activated carbon filter. By doing so, it helps to solve the issue of saturated filters. What you also need to know is that the filter decomposes pet odors chemically, preventing second-hand pollution.

This formula also extends the life of the activated carbon filter. Examples of contaminants captured by the filter include unpleasant odors, bacteria, and viruses. Others include pollen, smoke particles, fine dust, and mold spores.

Learn more about household air pollutants with their health effects and sources.

The air purifier produces high-power vortex airflow with the top air outlet. What’s impressive about this technology is that it increases the effectiveness of air circulation.

The purifier can deliver 142 cubic feet of clean air per minute on the highest fan speed settings. With the CADR ratings, the purifier can clean a 210 square feet room five times in an hour. Check our recommended room size below.

Based on research, air purifiers produce noise ranging from 35 decibels at the lowest fan speed. At the highest fan speed, they create sound ranging from 60 decibels and above. Appliances that can produce 35 to 70 decibels include a refrigerator, dishwasher, and vacuum cleaner.

The Levoit Core P350 Air Purifier has a noise level ranging between 24 to 50 decibels. This air purifier keeps noise levels as low as 24 decibels because it has QuietKEAP technology.

The air purifier has intuitive controls that include the power button, fan speed, sleep mode, pet-proof, and timer. To turn on the purifier, plug it in and tap on the power button. When you do so, the fan will begin at the lowest speed – 1.

The highest fan speed setting is 3. When you select this setting, the noise level will increase, but the air purifier will clean your air faster. 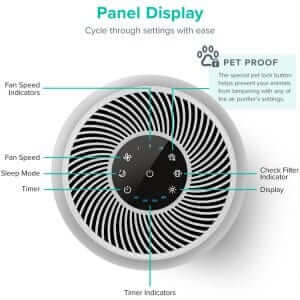 To increase fan speed, tap on the fan speed button, and select your preferred speed level. What you need to know is that the air purifier has a memory function. As such, when you plug in and turn it on, it will remember the air purifier’s previous fan speed setting.

The air purifier timer function allows you to select how long the air purifier will run. For example, you can choose two hours, four hours, eight hours, or twelve hours.

Another useful control is the pet-proof button. This particular button prevents your pets or child from tampering with any of the air purifier settings.

Annual Filter Replacement: ~ $70 based on 6-month use per filter (check availability & filter price).
Monthly Energy Consumption: ~ $1.9 (based on 12 cents per kWh and 12 hours use on top speed per day). Use our Energy Consumption Calculator to find out the bill based on your usage and the local energy rate.

The Levoit Core P350 has a non-woven fabric pre-filter, while the Levoit Core 300 has a nylon pre-filter. What you need to know is that both are effective in obstructing large particles.

When it comes to replacement, users have the option of four filters when they choose the Levoit Core 300. These filters are typically based on the needs of your environment. But, the Levoit Core P350 has only one type of filter you can choose.

The granular activated carbon filter of Core P350 is better than the Core 300 with the ARC (Air Reborn Odor Removal) formula.

Q. Is the pre-filter washable?
A. No, since the pre-filter comes in a composite filter, which is not washable. You can remove the pet hair and dust using a soft brush or vacuum cleaner. The Vital 100 comes with a washable pre-filter.

Q. What is the process of resetting the filter replacement indicator?
A. After replacing the filters, plug in the air purifier, and the Filter Replacement Indicator will light up. Press and hold the Check Filter Indicator for 3 seconds, and it will turn off if the reset is successful.

Levoit Core P350 air purifier has a three-stage filtration system that will remove pollutants from the air as it drifts through the filters. This compact unit will not only remove pet dander and odor but also remove fine dust and smoke particles with its H13 HEPA filter.

If you have cats or dogs in the house and you are allergic to pet dander, then you can use it in the room to reduce airborne pet allergens.