You are here: Home / Healthy Breathing / Terrible Dangers of Secondhand Smoke: How to be Protected

Secondhand smoke refers to the smoke you inhale due to the action of other people. For example, if you live in the same house which smokers, they will smoke and fumes from the cigarettes they are burning will spread in the house, and you will end up inhaling them involuntarily. There are several dangers of secondhand smoke which you should know and make efforts to avoid them so that you can enjoy good health. 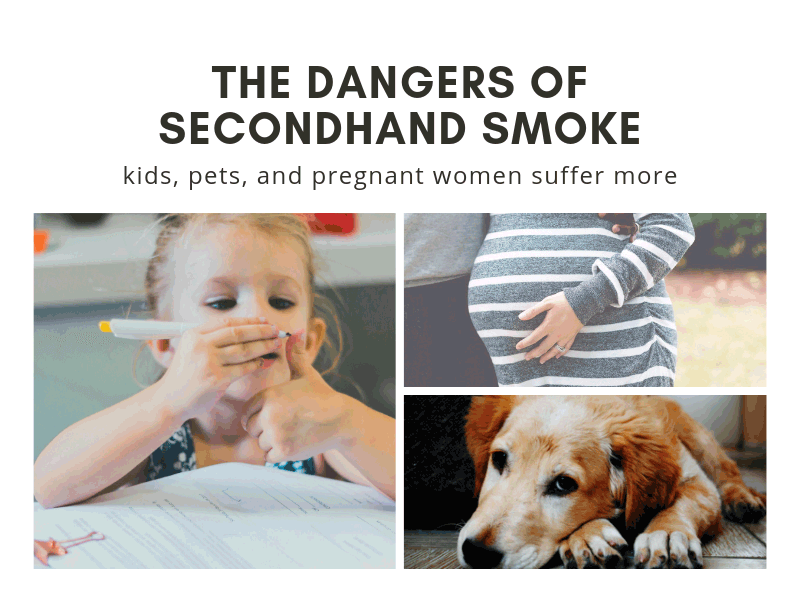 The smoke from tobacco can lead to several lung-related diseases such as asthma, emphysema, chronic bronchitis, Chronic Obstructive Pulmonary Disease (COPD). If you live with someone who smokes, you are at a higher risk of developing lung cancer. From research, it has been noted that people who are exposed to secondhand smoke have up to 30% elevated risk of developing respiratory-related illnesses.

When you are exposed to smoke from tobacco, you are at a higher risk of developing eye and nasal irritation. The smoke from smoking tends to affect your eyes and the respiratory system directly. It is essential to look for a way you can avoid the secondhand smoke.

There is an increase in the risk of lung cancer due to exposure to secondhand smoke. The tobacco burned in cigarettes contains a lot of cancer-causing compounds. If you get exposed to the compounds regularly, then you develop the risk of developing lung cancer. From research, it has been noted that people who are exposed to secondhand smoke have up to 30% elevated risk of developing lung cancer. (source)

There are several thousands of harmful ingredients in tobacco, which can expose you to health complications, which can finally lead to an untimely death.

Increasing the Risk of Type 2 Diabetes

New studies show that there is numerous risk of developing type 2 diabetes for passive smokers. The more exposure on secondhand smoke increases the risk significantly. (source)

Risks of Secondhand Smoke on Children and Pets

There are several ways children are affected by secondhand smoke. Here are some of the ways:

Increased respiratory infections: When pets and kids are exposed to secondhand smoke, they tend to suffer from frequent infections such as pneumonia.

Chronic coughs and asthma: It is common for pets and children to suffer from coughs and asthma due to high exposure to the secondhand smoke. Remember, children will hardly move away from the smoke if they stay with someone who smokes.

Recurrent ear infections: It has been noted that secondhand smoke can lead to ear infections. You need to act fast and manage the issue before it is too late.

Cataracts: The smoke can interfere with the eyes of the pets and children. If the exposure is too much, it can lead to cataracts and even poor dental health.

Exposed to passive smoke is very dangerous for both baby and mother during pregnancy. It increases the risk of stillbirth, poor baby health, low birth weight, and other pregnancy complication. (source)

How to Avoid Secondhand Smoke

There are several ways you can avoid secondhand smoke. Here are some of the ways you can easily prevent the smoke:

Make your indoor smoke free zone. Ask smoking visitors to do it outside the house. You can set aside a smoking area. Prohibit babysitters from smoking near children because the smoke can affect the children. Don’t allow smoking in the car.

Open your windows and fans whenever you smoke in the house. It allows free circulation of air hence reducing the intensity of the smoke.

Book nonsmoking room each time you stay in a hotel.

If you cant control the smoking in the house or smokes come from your neighbor bothers you, then you can bring an air purifier to get rid of the smoke. True HEPA Air purifiers can effectively remove the particles released from tobacco smoke. Read our reviews on best true HEPA air purifiers for tobacco smoke and odor.

Passive smoking is equally as dangerous as active smoking. Since secondhand smoke exposure mostly occurs in the home and car, we can easily keep us protected by ban smoking or using an air purifier.